A downloadable game for Windows and macOS

In Black Heaven, you’re a former scholar and one of the last survivors of a plague that’s destroyed the world you used to know.

After nearly succumbing to the disease, your life is saved by a mysterious necromancer named No-Eyes, who offers you the chance to escape death forever and relive your past. All he asks are the souls of your former classmates:

As you return to the ruined academy where you spent your happiest days, you’re haunted by the pleasant memories of your old friends, and the line between memory and madness becomes dangerously blurred.

This is the Extended demo of the game. The full game is still under development.

Contact us at occulttrianglelab [at] gmail [dot] com if you need to get in touch with the dev team!

Alright, so I streamed this game last night on my Twitch channel and I gotta say, though I enjoyed the story and progression, I'm a bit confused as to when the "dating sim" starts.

I've never really played a dating sim before, but I definitely wasn't expecting this. To me this was more of a narrative story than a dating simulator. I mean, I liked the game, it just wasn't what I expected. I played the entire demo waiting for the "dating sim" to start, waiting for something that lead to the premise of the game which is explained by No-Eyes when you meet him (no spoilers).

I love the dialogue, the graphics (especially the carefully placed lighting/shadows), the animated expressions on the characters, the attention to descriptive detail, and will absolutely play this again when it's fully released.

I just think that maybe instead of titling it "A Necromantic Dating Sim", you may want to change it or just let go of that extra altogether.. to even label it as such is really a detriment to the story itself. Other than that.. if you're into VN's this is heavy on the "Novel" part and very beautifully written.

Wow, this is an impressive demo! It was hard to finish it in one night, but I didn't want to ruin the pacing by picking it back up the next day. I have a few questions though.

1) Aside from the tutorial segment with No-Eyes, is the fractal madness mechanic implemented in the demo? I tried loading a couple of saves, and nothing seemed to change, but it could be that those were unrelated scenes. It's okay if it isn't! I just want to know if I can test it out.

2) When Ru "clenches her fists and shakes them excitedly up and down", is she stimming? I ask as someone who has stims myself; mine are pacing and hand-flapping, for reference.

I'm really excited for Black Heaven! Thank you all for making this wonderful game!

So glad you enjoyed the demo! To answer your questions:

1) Right now, there's no Fractal Madness at work in the demo--the scene with No-Eyes is used solely to explain why the protagonist can go back in time to undo things!

2) Interesting! Ru shaking her fists up and down in excitement wasn't intended to be stimming behavior, but I can see how it's similar!

Thanks so much for your encouragement and support! It means a lot to us!

I can neither confirm nor deny whether you can date Daddy No-Eyes.

Maybe it will be hidden in a secret route...

This demo is very interesting! I especially love those horrific scenes in the library. I'm definitely looking forward to the full game. :D

Hey, thanks! Glad you enjoyed the more...disturbing parts.

Hello! I am a university student from Turkey and I am studying English language for 3 years now. I had some minor experiences with translation and in the future I am planning to have a career in game localization. I would love to translate it to Turkish for free! :) If you are interested please contact me.

Really like the character & settings that this visual novel covers, there are so few visual novels that cover necromancy, or a character that's dedicated to martial arts like Izagi. ^o^

This was absolutely a delight to play for a demo! I can't wait for a full release!

Thanks so much! I'm so glad you enjoyed the demo. We'll be working on an extended demo soon, so stay tuned! 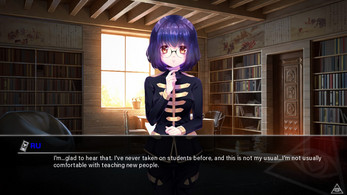 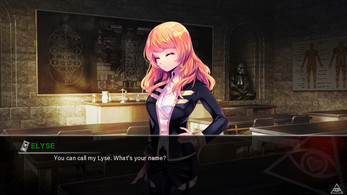 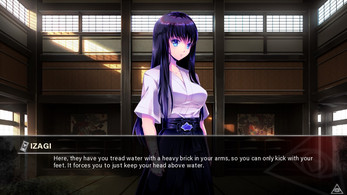 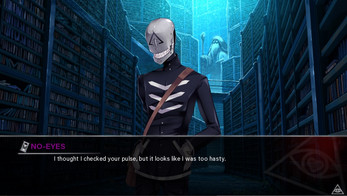